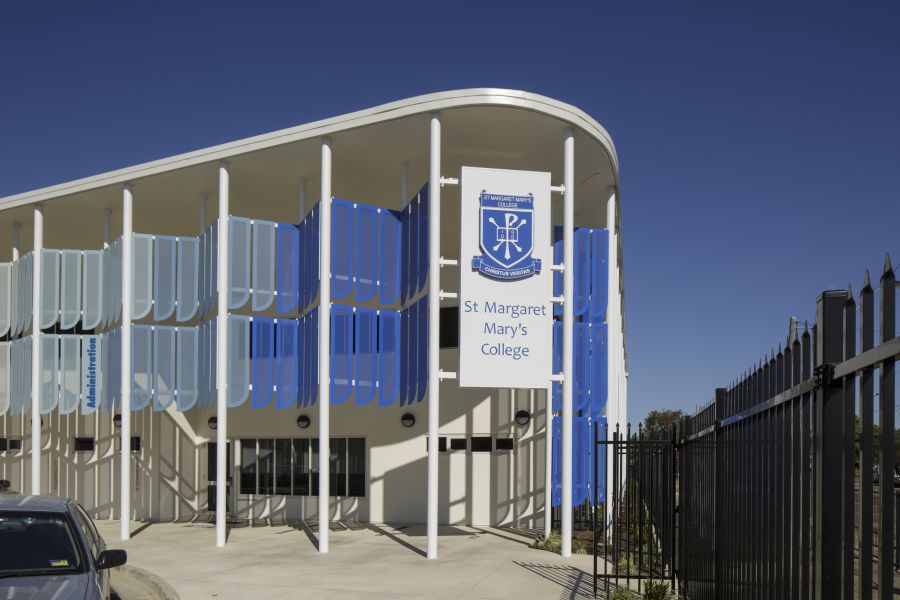 St Margaret Mary’s College has celebrated a significant milestone in the school’s history, with the official opening of a $4.957 million building project which has transformed the well-known landscape of the school.

The College is Townsville’s premier girl’s school, accommodating more than 770 students and the three new buildings bordering one of Townsville’s busiest roads have changed the public face of the school and provided large flexible learning spaces for an array of use, from visual art exhibits to modern dance displays.

College Principal, Mrs Kathy Park, says the latest works have piqued the interest of students and teachers in the science lab, the art rooms and the hospitality centre.

“The landscape of our school has continued to change, and the works are part of a multi-million dollar masterplan project to ensure learning spaces are technology rich, allowing for innovation and teaching excellence,” Mrs Park said.

“The new buildings have allowed for upgrades to the College’s student support services, important in a school which focuses on its students’ individual successes.

“Our newly-opened Student Wellbeing Centre includes the full suite of offices for Pastoral, Guidance and Career Counselling, as well as the Health and First Aid facility.”

The construction was stimulated by funds from the Queensland Government and the Australian Government.

“More construction works will be finalised in early 2016, and staff and students are looking forward to a new Performing Arts studio, including stage, change rooms and a state-of-the-art facility for teaching Dance and Theatre Arts,” Mrs Park said.

The new buildings were blessed by Fr Thomas Madanu and the Member for Townsville, Scott Stewart, officially opened the facilities. Mr Stewart is representing the Minister for Education, the Hon. Kate Jones.

We were blessed to again be part of this wonderful project. Many thanks to the staff and students who supported this....
Read More

BOOK A TOUR OF OUR COLLEGE

Congratulations to Matt Warde 2020 Educator of the Year

Huge congratulations to our Technologies/E-Learning Curriculum Middle Leader, Mr Matthew Warde, who was awarded 2020 Educator of the Year Award from the ‘Queensland Society for Informa...
Read More

On Tuesday, 21 May, SMMC welcomed Bishop Tim Harris, who joined with us as we celebrated the blessing of our new refurbished library and buildings and ‘Compassion’ sacred sculptu...
Read More

Our annual College ANZAC Day Service was held on Wednesday, April 24.  We were honoured to hear the address from Lieutenant Bianca Potter, a remarkable young woman and role model in the...
Read More

For decades, St Margaret Mary’s College has led the way in the education of young women in Townsville.  Now, as the first cohort of Year 11 students embark on their schooling in t...
Read More